The James A. de Rothschild Collection at Waddesdon Manor (14 volumes)

Published variously for the National Trust/ Waddesdon Manor by Office de Livre & Philip Wilson Publishers Ltd., 1970s to ‘90s. Fourteen thick volumes—too heavy to lift—devoted to this extraordinary collection of art and decorative arts. An impressive set. Hardcovers with jackets all in very good condition, with only light wear. Some volumes have a small elegant bookplate. Note that this will be very expensive to ship, and extra charges may apply outside of New York City.

Waddesdon Manor is a country house in the village of Waddesdon, in Buckinghamshire, England. It is located in the Aylesbury Vale, 6.6 miles (10.6 km) west of Aylesbury. The house was built in the Neo-Renaissance style of a French château between 1874 and 1889 for Baron Ferdinand de Rothschild (1839–1898) as a weekend residence for grand entertaining and as a setting for his collection.

Aerial view of Waddesdon from the north

In 1874, Baron Ferdinand bought a farming estate from the Duke of Marlborough with money inherited from his father Anselm. He was familiar with the estate as he had seen it while hunting in the area. There was no existing house, park or garden, only a bare hill that had been stripped of its timber.[3] The foundation stone was laid on 18 August 1877, and the site was quickly transformed.

The first house party was held in May 1880 with seven of Ferdinand's close male friends enjoying a grand fireworks display. When the main house was ready in 1883, Ferdinand invited 20 guests to stay. Before his premature death in 1898, on weekends between May and September Baron Ferdinand played host to many important guests including the future Edward VII, politicians and members of The Souls group. House parties usually involved 14 to 20 people coming to stay[4]

Guests commented on the level of luxury service provided by the 24 house staff.[5] In 1890, Queen Victoria unusually requested to pay a visit. She was impressed with the beauty of the house and grounds as well as Ferdinand's ability to quietly manage the day's events. She was struck by the newly installed electric lights, especially designed to look like candles in the chandeliers, and it is reported that she asked for the room to be darkened to fully witness the effect.[6] 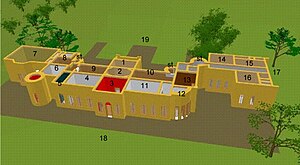 When Baron Ferdinand died in 1898, the house passed to his sister Alice de Rothschild. She saw Waddesdon as a memorial for her brother and was committed to preserving it. She did add significant items to the collection, particularly furniture and carpets with French royal provenances, Meissen porcelain, textiles and armor[7]

Following Alice de Rothschild's death in 1922, the property and collections passed to her French great-nephew James A. "Jimmy" de Rothschild, who was married to an English woman, Dorothy Pinto. James further enriched the Manor with objects from the collections of his late father Baron Edmond James de Rothschild of Paris.[8]

James and Dorothy hosted a Liberal Party rally at Waddesdon in 1928, where David Lloyd George addressed the crowd.[9] During World War II, children under the age of five were evacuated from Croydon and lived at Waddesdon Manor, the only time children lived in the house. James and Dorothy also provided asylum for a group of Jewish boys from Frankfurt at Waddesdon.[10]

When James de Rothschild died in 1957, he bequeathed Waddesdon Manor, 120 acres (0.49 km2) of grounds and its contents to the National Trust, to be preserved for posterity. Dorothy moved to Eythrope and the Manor was never again used as a residence. It opened to the public in 1959 with around 27,000 visitors in the first year.[11] Dorothy chaired the new management committee in close collaboration with the National Trust and took a very keen interest in Waddesdon for the remainder of her long life.[12]

At Dorothy's death in 1989, Jacob Rothschild inherited her position and responsibilities. At his initiative, the Manor underwent a major restoration from 1990 to 1997, and the visitor attractions were enhanced, including the creation of the Waddesdon Wine Cellars.